Plumbing Throughout History: A Reflection 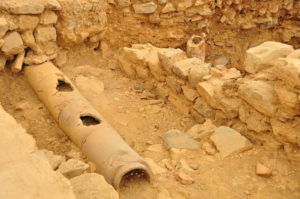 It can seem like plumbers have been around forever; we can’t seem to escape the Super Mario, lack of a belt stereotype that plumbers have had for years. You’ve probably seen at least one movie or show where the plumber crouches down and you see way more than you intended. But the reality is that plumbers come in all shapes and races, and have a storied history that traces back several thousand years.

The first water pipes were discovered near the Indus River in what is now India around 4000 B.C, over 6000 years ago! Surprisingly complex river systems have been discovered in the region, and you can bet they needed some ancient plumbers. About 1000 years later, copper piping, sophisticated bathrooms, and sewage systems became rather complex in Egypt. Over the next 2000 years, civilizations across Europe, the Middle East, and Asia began to incorporate complex piping projects.

Sir John and His Flushing Toilet

The very first flushing toilet is famously attributed to Sir John Harrington, godson of Queen Elizabeth I and bathroom legend. It was very rudimentary by today’s standards—the “modern” toilet wasn’t invented until 1775 A.D, when Alexander Cummings included an S trap. That way, water could stay in the bowl after flushing.

The 1800s and 1900s represented a transformative time for America’s infrastructure. Major cities like Philadelphia and Chicago introduced comprehensive piping and sewage systems, and the toilet continued to see a marked improvement. Soon, quality plumbing was not reserved for the rich and luxurious, and the common man could enjoy a quality system because of thousands of years of trial and error!

Plumbing You Can Trust

Here at New Age Plumbing, we’re taking the story of plumbing forward with quality service. As systems evolve, so do we—that’s what you should expect from El Paso’s best plumbing team. Contact us today to set up an appointment or ask us questions.